Background: Settled by Norwegian and Celtic (Scottish and Irish) immigrants during the late 9th and 10th centuries A.D., Iceland boasts the world’s oldest functioning legislative assembly, the Althing, established in 930. Independent for over 300 years, Iceland was subsequently ruled by Norway and Denmark. Fallout from the Askja volcano of 1875 devastated the Icelandic economy and caused widespread famine. Over the next quarter century, 20% of the island’s population emigrated, mostly to Canada and the US. Limited home rule from Denmark was granted in 1874 and complete independence attained in 1944.

The journey: For a long time I have been curious about Iceland. I have had an imagination that Iceland is an exotic country but at the same time in many ways similar to Norway. Well, since Iceland is not so far away and my mother turns eighty this year, why not go and see, and give a birthday-present to my mother?

The day we left, May 15th, was one of the days that are so full of changes; before leaving for work I packed my small luggage (remember «travel light»). I was working half day before I went to the airport where I met my mother who had travelled by plane from Ålesund.

Then we had a perfect flight to Reykjavik. After a long day we didn’t do much that evening. To underscore that we were on Iceland we had fish for dinner. Just delicious! After dinner I walked around to learn the city to know. It was rather fresh climate with a cool breeze. I remember that my friend

Tina from Mumbai, in her last e-mail, wrote that it was so hot in Mumbai that she had problems with her energy! It should have been something in between – the average temperature would probably have been comfortable.

Anyway; while walking around in Reykjavik I got the impression that Reykjavik seems to be a nice and exciting place! I looked forward to the next days! While walking I was also thinking of how lucky I am; in one year I have had the possibility of travelling south to Madagascar, Mauritius and the Seychelles, then east to Thailand an now north-west to Iceland. There is so much to see and explore in the world!

On the 16th of May we started out walking, following the advised architectural walking tour in The lonely planet guide. The first place we visited was Austursvollur where the first settler, Ingolfur Arnarson, had his hayfields.

The statue is of Jon Sigurdsson who led the campaign for Icelandic independence, which finally took place at Tingvellir on the 17th of June 1944. We passed the Allthing, home to the Icelandic parliament and went further on to the Domkirkja, were parts of both buildings dates back to the 19th century. We also passed Ingolfstorg were there are fountains and a steam vent releasing pent up energy from below the ground! The architectural contrasts in Reykjavik are striking. The Radhus or City Hall is an angular construction of concrete, glass and carved lava. Water trickles down the moss-covered walls and into lake Tjorn.

The Lonely planet guide takes us further along nice streets with interesting buildings and monuments, releasing some of the Icelandic history. The most striking is the Hallgrimskirkja, the vast, modernistic church that lords over Reykjavik. The tower is 75 m. high and you can see it from 20 km. away. It took 34 years to complete the church, starting in 1940 and it was finished in 1974. Right in front of the church is a statue of Leifur Eiriksson, the Viking who almost for sure discovered America, 500 years before Columbus.

After seeing the impressive Hallgrimskirkja it was time for a lunch. Since the weather was quite nice, we had the opportunity of having our lunch outside and we viewed the centre of Reykjavik from a nice terrace.

Straight ahead to the sea from Hallgrimskirkja, we passed the sculpture Sun-Craft.

It is something between a Viking ship and a giant silver centipede. The sculpture fits just perfect in this light atmosphere where the sky and the sea are the dominating elements!

In the afternoon I visited the Vesturbær outdoor Terminal pool. Very nice with a swimming pool 25 m long and 4 other small pools with different temperatures. The hottest from 38 C – 42 C, really a hot pot! In addition there also was a steam bath and a sauna.

The advantages of staying at a place with possibilities of self- catering are many. One is the kitchen where you meet other quests, and while we were making dinner that evening we came in contact with a lady from Holland. She was just finishing writing a book for children about Iceland. She was very fascinated of Iceland and one year she had spent three months here in Reykjavik, “house watching” for a friend, as she called it.

17th of May – the independence day of Norway. Well, it can be very cold and rainy in Norway at this time of year, but here in Reykjavik it really was cold and rainy. We started out trying to go to the outdoor museum, but soon found out that it was closed and only possible to watch from outside. We decided to go anyway, but soon changed our minds and took the bus to The Blue Lagoon instead. The Blue Lagoon is a very special place where you are swimming in comfortably hot water outdoor with the fog around your ears. The nearby Svartsengi geothermal power plant is the reason why the lagoon developed. After processing the water into power, the warm water is channelled into the lagoon which permanently has a temperature of 37 – 39 C. The milky blue waters are rich in blue-green algae (cyanobacteria), mineral salts and fine silica mud which are good for the skin.

In the afternoon I went to Seltjarnes, just to have a view of the surroundings. A fresh and open place, a little bit cold. It was very windy, and I had a feeling that the wind was blowing against me wherever I turned. This is far to the North…

The 18th of May we decided to act as real tourists and jumped on to an organized trip around the Golden Circle. The guide did a really good work and told stories and facts about the surroundings all the way. E.g.

he told about horsebreething which is a quite important way of living today. About a third of the Iceland Horses are now in Germany, thanks to the export.

After a while we arrived at Gullfoss. Gullfoss is a very impressive waterfall which tumbles 32 m. into a steep-sided canyon. The guide also connected Gullfoss to a story. The falls came within a hair’s breadth of being destroyed forever during the 1920’s., when a team of foreign investors suggested that “the white river” should be dammed for a hydro-electric project. The landowner refused to sell, but the developers went behind his back and obtained permission directly from the government. To lobby their cause, the owner’s daughter went all the way to Reykjavik and even threatened to throw herself into the falls if the tribunal decided they were to be destroyed. The government ruled against her, but the investors failed to pay the lease, so the sales agreement was nullified and the falls were saved anyway. Gullfoss was

donated to the nation in 1975 and has been preserved as a nature reserve ever since.

After having a nice lunch we climbed into the bus again. The next stop was to be Thingvellir. When I was watching the surroundings from the bus I was quite impressed. The air was very clear, the water was very clean and the nature was special with all the rifts in the ground. The nature is in a way rough and sensible at the same time. Tingvellir or Althing is, as already mentioned above, the first functioning legislative assembly in the world. The first meeting was held in AD 930. There isn’t much evidence of Tingvellirs

The next place for a stop was Geysir. The original Geysir was a spouting hot spring, and all others around the world are named after it. The great geysir at Geysir first began spouting in the 14th century, blasting a jet of superheated water up to 80m into the air, but the spring became inactive in the 1960s. The spring occasionally comes back to life after earthquakes. Luckily the geysir has a back-up, Strokkur, which spouts up to 35 m. every 10 min. This is probably the most reliable geysir in the world.

impressive history on the ground, bud it is possible to see rests of the walls of the small shelters the people were living in during the two weeks the meetings lasted. In 1928 the Icelandic government made Tingvellir to the country’s first national park.

After the bath we went for a walk on a path running along the shore. We wanted to go to the Pearl, but discovered that we had to go all the way around the domestic airport. It was quite a long distance and on our way we passed a beach Naustholsvik Geothermal Beach. This is man made, and it is constructed in a way that the cold water from the sea doesn’t come in, and the warm water which is pumped into the basin doesn’t go away. The warm water comes from a hot spring and the ambient water temperature is around 20C year-round.

Finally we reached the last path leading to the Pearl. This went through the forest and in front of it there was a fountain of erupting water from the ground. We actually were on a hot spring. We went to the nice cafeteria and had a deserved lunch. The view over Reykjavik was just incredible nice.

Perlan is developed into a tourist-attraction from the huge water tanks that supply Reykjavik with its hot water. These tanks are located on a hill close to a hot spring.

After lunch we went to the Saga museum and were guided through the history of how Iceland became inhabited. It was really very interesting. Finally we were heading «home» to the guesthouse, still walking.

20th of May, the last day and we had to say good-bye to this cold, but at the same time such a warm country! I admire and I like the way the Icelandic people has turned the disadvantage of living on a volcanic area into an advantage! Their creative use of the hot springs turns this cold country into a warm and exotic place – even outdoor!

Picture of the day 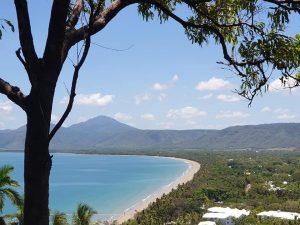 My name is Arild, Norwegian, born in 1964 and I’m passionate about traveling. Luckily, my girlfriend Tove, born 1963, is also bit by the travel bug and we are sharing some of our stories on this site. We also have two condo – one in Jomtien, Thailand and one in Esentepe, Northern Cyprus, that we rent out. Take a look!